I don’t know about you but I am suffering from an overdose of beauty contests. Now don’t get me wrong. I am not a killjoy. I totally understand the benefits of these contests, blah blah blah, but it is the easiest thing I find promoters or organisations turn to when they want to ‘motivate’ or positively influence’ young ladies so after a show of hands they usually turn to beauty contest as the only option.

I wonder who had the first ‘beauty contest? Whose grand idea was that? Legend has it, and I really mean Google, says that the first international beauty contest was done way back in 1888 in Belgium. Modern contests are said to be traceable to the Miss America Beauty Pageant, which was first held in Atlantic City in 1921, so these contests have a bit of history. But like everything else they have evolved to every thing  imaginable so you have contests for humans, cars, men, even dogs have their contests. You see why I’ve been  beautified out of these contests. 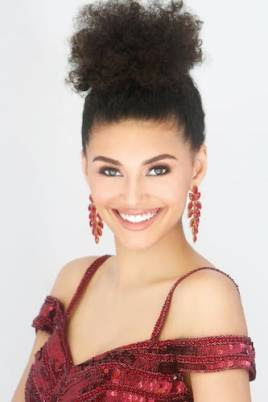 But a funny thing happened last Sunday at Tyler Perry’s studio. For some strange reason I was compelled to watch the latest version of the Miss Universe contest and I think it was because across my IG timeline, I saw a few black girls in the contestant mix. For that reason alone I wanted to watch to see what surprises would be in store. After all, Miss USA was black, of course Jamaica, the Caribbean and the African countries with Miss Ivory Coast serving you a dose of dark chocolate with luscious thick lips, – the kind they pay for in Hollywood. But get this, Miss Iceland was black, yes BLACK. What happened ? Oh the controversy! So this contest was inadvertently set up to be a squeaker.

The contest had its usual pitches to dark skinned people as Steve Harvey was there as the host, looking like a dressed up house – , well let me not go there. Let’s just say Steve was Steve. At least he read the teleprompter correctly. When the top 20 were called and I saw Miss South Africa with her boy’s faded cut, her so called ‘nappy’ hair, all black and beautiful, refusing to wear purchased wigs from China or Brazil in order to look like the ‘standard’ of beauty this contest upholds, I said to myself sis, I wish you luck but these people ain’t ready for your look. And then she opened her mouth and I was sold. This girl was going to be heard tonight.

Well heard she was as the ‘selection committee’ , not judges mark you, selected Zozibini Tunzi, Miss South Africa 2019, the slim, slightly bow legged, dark skinned, wearing a boy’s fade, nappy hair beauty as the top woman of the night.  I had already made my choices but I was waiting to see, as they usually do, if they would elevate the whiter contestants over the dark skinned girls, but this time they couldn’t. It was too obvious, she was way ahead of the field in her response and her mission was directly in collusion with the organisation’s standard of beauty and she took it head on.

” I grew up in a world where women that look like me with my kind of skin and my kind of hair, were never considered to be beautiful and I think that it is time that it stops today. I want children to look at me and see my face, and I want them to see their faces reflected in mine, thank you” – Zozibini Tunzi. MissUniverse 2019

That response awakened every  dark skinned person and every white skinned person who has a heart,  to stand up and pay attention. What is beauty? Who defines beauty? Zozibini just redefined it in front of millions watching. It was no longer what the MU organisation defined it, rather it was standing in front of you, confident, radiant, unapologetic and reminding the diaspora to stop drinking the koolaid served by organisations like MU about beauty.

Zozibini placed the standard of beauty at the feet of all those melanated people that are still seeking affirmation from the Vogues, Victoria Secrets and all the organisations that sell beauty as their product. Our people, and thankfully not all, still want their natural hair to look like Beyonce with her straight, long wigs and perm. Some are still bleaching, some are scraping their eyebrows to smithereens, some even thin their lips all under the cover of fashion and the tacit acceptance of European and American standards of beauty.

You see this every day on social media or  just walking around town, girls with green hair, orange hair, grey hair, hair that falls to the ground, nails that look like weapons of mass destruction, cherry red Eva Gabor’s lips, brows like Medusa. The masks are everywhere. The girls, and some men too, are changing and  shaping their looks  to be  accepted in the fairyland world of social media, governed these days by the Kardashians of the world. Zozibini said it should stop. I agree with her but sadly it won’t. Some of our people are too drunk drinking that koolaid. 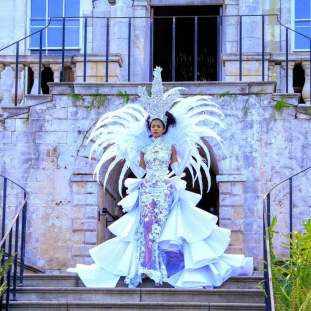 Miss Jamaica in her National Costume

Which brings me to Miss Jamaica and her ‘national costume’.  Her handlers choose to represent Jamaica with the Annie Palmer costume, all white , sparkling and glittery announcing to the world that Jamaica’s wicked ‘witch’ is something we are proud to be associated with and is what moves us as a people. Really now? Annie Palmer?

The story is at best an excellent marketing ploy for Rose hall developments and at worst a horrible reminder of the atrocities dark skinned people had to endure during that horrible colonial  past, but somehow no one seemed to have seen the big picture of choosing that costume. That’s what happens when corporate greed becomes a virtue to organisers strapped for cash as the only thing that affects reasoning in this case is cash and cash won.

Thanks to Zozibini, every little girl with their unprocessed hair can say I. AM. BEAUTIFUL. Already the hashtag #MissUniverseLooksLikeMe is trending , a sign that her message is being heard. But it is one thing to hear a message and another to act on the message.

Black beauty is not a horse. It was a horse when Hollywood said so and the horse was owned by a white girl. That message has to stop. BLACK has always been the foundation of beauty, the first people on the planet were nubians, there is nothing to be ashamed of. When you go to an art museum, the thing you’re least likely to encounter is a picture of a black person. When it comes to ideas about art and about beauty, the black figure is absent. Zozibini said that has to stop. And I am with her.

Beauty has always come from black people. Make your beauty space in  this world. Zozibini has shown you how to make space. Take her lead. Stop being a compliant negro. Natural hair? Wear it well. Big lips? Moisturize it well. Lashes and brows to heavy? Groom them well. Define what it is to be Black. Don’t ever let Babylon’s definition defines you. Her win and her natural looks only reinforce what we have already known  and that is Black. Is. Eternally. Beautiful.

Written by Paul Tomlinson (c) – Check out his website HERE

Download The Jamaican Blogs™ App for your Android device: HERE

Remember to share this article on Facebook and other Social Media Platforms. To submit your own articles or to advertise with us please send us an EMAIL at: [email protected]

Why not send former Kingston-resident Love Doctor your relationship queries? Use the form to submit your question(s). Question: I’ve had

Hotel Weekends Have Turned Into A Nightmare – Help Me Love Doctor

10 Things Jamaica Has Contributed to the World

How Has Jamaican Music Affected Art And Pop Culture